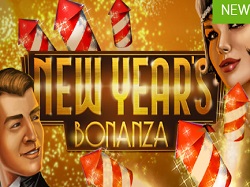 Vikings is a Playtech company that has developed several popular online pokies such as Age of the Gods: God of Storms, Cascading Cave, Buccaneer Blast, Legacy of the Wild, Ice Cave, and Justice League, and their very latest release is a New Year’s Eve-themed online slot called New Year’s Bonanza. You could also say that this game has a 1920’s/Luxury Lifestyle theme, and the good news is that there are several fun ways to win prizes

This brand new online slot first arrived at some of our reviewed SA online casinos towards the end of November 2019, and it was released simultaneously on desktop and mobile. You can play on the New Year’s Bonanza online slot either in the real money mode or free play demo mode, and it can now be launched either instantly in your web browser or from within the Playtech casino download client right now at Casino.com or Mansion Casino. Don’t forget that on any lucky spin, you will be playing to win up to up to 375x times your stake.

Altogether there are 5 reels and 50 fixed paylines and the reel set is laid out in a 3-4-4-4-3 formation. Low rollers can take one spin of the reels from as little 0.25 coins, and high rollers can spend up to as much as 500.00 coins per spin. The Clock Face Symbol is the Scatter Symbol, and the only other special symbol to keep an eye out for on this game is the Rocket Wild Scatter Symbol. Wild Symbols will substitute all other symbols on the reels to help form new line wins apart from the Scatter Symbol.

The Rocket Wild Symbol will only ever land on reels 2, 3 and 4, but the Scatter Symbols can land in any position across any of the 5 reels. Whenever a Wild Symbol does land on any of the three middle reels, it will turn into a Firework Wild Symbol. When this happens, it will rotate to face a random direction (either up, down, left or right), and it will then expand right the way across the reels in that direction.

If more than one of the Wild Symbols happen to cross paths during the Firework Wild Symbol feature, then it will instantly turn those Wild Symbols into 3X Wild Multipliers. If that 3X Wild Multiplier also then crosses path with any 3X Wild Multipliers, then all of those symbols will now turn into 10X Wild Multipliers for even bigger wins! You’ll also get to play in a Free Spins Bonus when three or more Scatter Symbols land on the reels at the same time and the Rocket Wild feature is also active during this exciting bonus round. To play on the New Year’s Bonanza online slot right now, go to Casino.com or Mansion Casino.com.