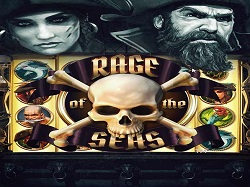 One of my favourite new online slots that I can recommend keeping an eye out for this weekend is a new Pirate-themed online slot from NetEnt called Rage of the Seas. The official launch date for this new NetEnt slot is Thursday, September 17th, but it has already arrived at a select number of SA online casinos. Some of the best places to play on a wide range of more than 150 NetEnt slots are Casino.com and Mansion Casino.

The new Rage of the Seas online slot is one of the best new Pirate-themed slots out there today. It has 5 reels and 1,024 different ways to win per spin, but the Boost Symbols landing on any of the three middle reels (reels 2, 3 and 4) can expand the reels even higher. If just 1 reel has been expanded, that spin will be played with 1,792 active win ways, but with 2 reels expanded on the same spin, you’ll be playing with 3,136 active win ways, and when all three middle reels have been expanded, it means that you will be playing with 5,488 active win ways.

The lowest cost per spin starts from just $/€/£0.20 (or equivalent value in Rand) and the maximum cost per spin is capped at $/€/£400.00. There are five exciting in-play features to look forward to, and there’s also a Free Spins Bonus Round to win prizes from. Perhaps the most impressive thing about this game is that on any lucky spin, you will be playing to win up to 27,440x times your total stake.

The random features that can trigger during normal play are a Minor Reel Upgrade, a Major Reel Upgrade, a Multiplier feature, a Spreading Wild feature, and a Stacked Wild feature. These features will trigger on the next spin after the Boost Symbol has expanded one or more of the reels. The Free Spins Bonus can also trigger in two different ways – either when 3 or more Pirate Skull Scatter Symbols land on the reels at the same time, or when 3 Boost Symbols have been collected during normal play on reels 2, 3 and 4.

If you live in South Africa, and fancy having a few spins on the new Rage of the Seas slot right now, go to Casino.com or Mansion Casino. The other two NetEnt slots with a Pirate theme that I can also recommend checking out are Hook’s Heroes and Ghost Pirates. Other great games include Pirate Isle, and Goldbeard from Realtime Gaming (RTG), Pirates’ Plenty: The Sunken Treasure, and Pirates’ Plenty: Battle for Gold from Red Tiger Gaming. You may also like to try Pirate Gold from Pragmatic Play, Pirate Charm from Quickspin, and Kingdoms Rise: Captain’s Treasure from Playtech.