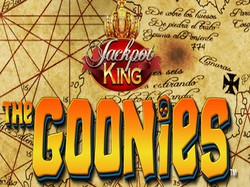 The Goonies online slot from Blueprint Gaming is now available on the software provider’s Jackpot King Network. In other words, you can still enjoy playing on the original The Goonies online slot, or you can also now play on the progressive jackpot version, The Goonies: Jackpot King. This exciting new Blueprint Gaming slot was released in October 2019 simultaneously on desktop and mobile, and it can now be found at a growing number of top-rated SA online casinos.

“The Goonies has been an overwhelming success for operators, with players embracing the opportunity to hunt for the elusive treasure of One-Eyed Willy,” said the Director of Marketing and Relationships at Blueprint Gaming, Jo Purvis. “With our Jackpot King functionality now available during the gameplay, players will be performing the Truffle Shuffle should they strike lucky and claim the big prize,” added Purvis.

There are three individual jackpots to play for at any one time, and they include the Royal Pot (the smallest jackpot), the Regal Pot (the medium-sized jackpot) and the King Jackpot, aka the Jackpot King pot (the largest of the three jackpots). The Royal Pot is currently worth just over R11,118. The Regal Pot recently climbed to more than R173,427, and the Jackpot King pot is now worth a cool R41,822,488.94

There are several other fun ways to win prizes on this game too, which has 5 reels and 20 fixed paylines, and the two main special symbols to keep an eye out for are the Wild Symbols and the Scatter Symbols. Low rollers can take one spin of the reels from just 0.10 coins, and it’s possible for high rollers to spend up to as much as 100.00 coins per spin. The Wild Symbol is the Coin, and this will substitute all other symbols on the reels apart from the Skull & Crossbones Scatter Symbol.

During normal play, 1 of 6 in-play features can randomly trigger at any time, and when 3 or more Scatter Symbols land in any position across any of the 5 reels at the same time you will instantly get taken away from the reels where you get to take one free spin on the prize wheel to win 1 of 6 exciting bonus games.

Don’t forget to check out this brilliant new online slot from Blueprint Gaming when you next play at Casino.com, especially if you enjoyed playing on the original Goonies online slot, or games such as The Naked Gun, Ted, Mars Attacks, Slots O’ Gold Megaways or Beavis and Butthead. The comments contained within this article were taken directly from an official Blueprint Gaming press release.