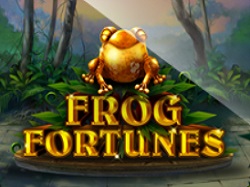 There are lots of fun-filled, frog-themed online slots out there today, and if you enjoyed playing on certain hit titles such as Super Lucky Frog from NetEnt, Frog’s Gift from Rarestone Gaming (a Playtech company) or Royal Frog from Quickspin, then you may also want to check out this new RTG slot as soon as it’s released on Wednesday, October 28th.

The new Frog Fortunes online slot from RTG will be released simultaneously on desktop and mobile, and South African players will be able to enjoy playing on this game at several trusted SA online casinos such as Yebo Casino, Punt Casino and Springbok Casino. It has 5 ‘Cascading’ reels, and with each spin that you take, there are 243 different ways to win. Low rollers will soon be able to play from as little as $/€/£0.20, and high rollers will be able to spend up to as much as $/€/£100 per spin (or equivalent value in Rand).

The game has Exploding Symbols, which can randomly land in any position across the reels on any spin. Each symbol can explode with a random blast pattern (there are ten different patterns altogether), and each pattern can cover a random number of reels and symbol positions. All symbols that happen to be caught up in the blast, including other Exploding Symbols, are then transformed into another randomly selected symbol.

The Springbok Casino manager and spokesperson, Daniel Van Wyke, recently commented on this upcoming new slot, saying, “The rainforest can be a frightening place to be, but with a golden frog helping them through the undergrowth players can not only survive but also seek out plenty of big wins as they make their way through to the clearing.”

He then went on to say, “Frog Fortunes combines normal reels with Exploding Symbols and Cascading Reels to deliver a truly thrilling experience to players with every spin, and with a max win potential of 150x their original stake they can potentially leave the rainforest with a small fortune of their own.” I managed to obtain these comments directly from an official Springbok Casino press release.

The game may not have a fun picking bonus or free spins bonus to win prizes from or any progressive jackpots, but the cascading reels and exploding symbols can generate the occasional big wins for you. Don’t forget that on any lucky spin, it’s possible to win more than 2,000x times your total stake. Some of the other popular frog-themed slots that I can also recommend keeping an eye out for while you’re waiting for this new slot to arrive (apart from the ones that I mentioned above) are Gold Money Frog from NetEnt, Frog Grog from Thunderkick, and Frogs ‘n’ Flies from Lightning Box Games.