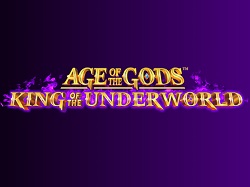 The new King of the Underworld online slot from Playtech has 5 reels and 20 paylines, you can play from 0.20 coins up to 40.00 coins per spin, and the biggest cash prize that you can win on this game is a fixed coin jackpot worth 10,000x times your total stake. You will instantly be awarded this jackpot when five of the Tartarus Wilds (the highest valued symbols) land across any of the active paylines, starting from the leftmost reel and stretching over to reel 5. You can also play to win big prizes during two entertaining picking bonuses called the Thread of Fate Bonus and the Gates of Hell Bonus.

The new Lord of Lightning online slot from Playtech also has 5 reels and 20 paylines, and you can play from 1.00 coin up to 40.00 coins per spin. The jackpot will trigger when five of the Zeus Wild Symbols show up along any of the paylines. Unlike the other Age of the Gods jackpot slots, the top prize can’t be won from within a second screen bonus round. The percentage of the jackpot that you can win is determined by how much you are willing to spend per spin.

For example, spending the minimum amount per spin will only get you 2.5% of the total jackpot when it triggers, but spending the maximum amount allowed (40.00 coins per spin) will see you getting the full 100% of the jackpot when it triggers. You can also play to win big cash prizes during the Free Spins Bonus. This will only ever trigger when 3, 4 or 5 of the Pegasus Scatter Symbols land on the reels at the same time.

I’m a big fan of the Age of the Gods slots, but to be honest, these two latest instalments aren’t my favourites. I prefer some of the other ones that I mentioned above. You may like them more than the other Age of the Gods slots, so don’t let my option deter you from checking them out when you next play at top SA online casinos such as Mansion Casino or Casino.com. All of these Playtech slots are available in the real money mode and free play mode, you can play on them either on desktop and mobile, and they take just seconds to launch in most web browsers, no download required.