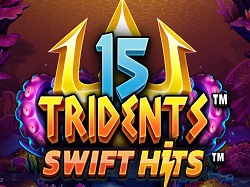 The new 15 Tridents online slot (aka 15 Tridents Swift Hits) is brand new Greek Mythology-themed slot that first arrived at some of our featured SA online casinos in March 2022. It was developed by PearFiction Studios, and it’s brought to you by Microgaming. There are two game windows in this new slot, which means there are two sets of reels. Both sets of reels spin simultaneously, and they both have 5 reels and 1,024 different ways to win per spin.

The Trident Symbols that land during the feature are sticky, which means each time they land, they will stay locked in place until the end of the feature. Better still, keep an eye out for the Sea Goddess because when she shows up at any point throughout the feature, she can add Extra Wild Symbols to the reels, or she can increase the current Win Multiplier. She can also upgrade the values of the symbols on the reels to help form even bigger winning combos for you.

If you would like to play the new 15 Tridents slot right now, go to Casino.com and register your free account. If you enjoy playing this new Greek Mythology-themed slot and want more similar games, then you may also like to try Gods of Olympus Megaways from Blueprint Gaming, Age of the Gods: God of Storms from Playtech, Ancient Fortunes: Zeus from Microgaming, and Zeus Lightning: Power Reels from Red Tiger Gaming.