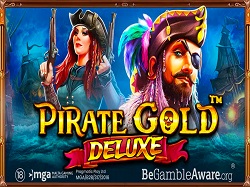 The new Pirate Gold Deluxe online slot from Pragmatic Play was officially released on desktop and mobile on Thursday, November 12th, and it’s now available to play at Casino.com. This new pirate-themed slot is the follow-up to the Pirate Gold online slot machine that has been keeping South African players entertained since it first arrived in casinos back in May 2019.

The two games are fairly similar with just a couple of differences, so if you enjoyed playing on the original Pirate Gold slot, and if you’re a fan of Pragmatic Play slots in general, then I’m also fairly certain that you’re going to enjoy playing on this fun new version too. The main thing that you will notice between the two versions is that this new version doesn’t have a Free Spins Bonus Round to win prizes from. Instead, it comes with a Streak Respins feature where lots of different prizes can be won.

It also has three fixed coin jackpots to play for – the Minor Jackpot, the Major Jackpot, and the Grand Jackpot. The new Pirate Gold Deluxe slot has 5 reels and 40 paylines, and it’s playable from $/€/£0.20 up to a maximum of $/€/£100.00 per spin (or equivalent value in Rand). There’s also a special ‘BUY MONEY RESPIN’ betting option that gets you guaranteed entry into the main bonus feature on the next spin. However, this will set you back 100x times your total stake each time, and the feature doesn’t always guarantee big wins, so only buy-in to the main bonus feature if you can really afford it, and only if you’re feeling really lucky.

The main bonus feature is otherwise known as the Lucky Treasure Bag feature, and it will trigger when 8 or more of the Money Bag Symbols land in any position across the reels on the same spin. Once triggered, you will start the bonus with 3 free respins, and any Money Bags that were in view when the feature triggered will lock in place. Several different Money Bags can land throughout the bonus, and they can award various prizes such as Stake Multipliers, Instant Cash Prizes, Retriggers, and one of three Jackpots.

The biggest jackpot, the Grand Jackpot, is worth 1,000x times your total stake. On the original Pirate Gold online slot, you could only win up to 15,000x times your stake, but on this epic new version, it’s possible to win up to 32,270x times your stake! This is one of the best new slots to play in November 2020, so don’t forget to check it out when you next play at Casino.com. It’s available on desktop and mobile, and it takes just seconds to launch in most web browsers.

Some of the other popular pirate-themed slots that I can also recommend checking out when you next visit this top-rated SA online casino are Rage of the Seas from NetEnt, Pirates’ Plenty: Battle for Gold from Red Tiger Gaming, and Jolly Roger 2 from Play’n GO.