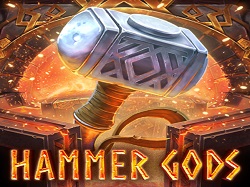 A brand new Red Tiger Gaming slot with a Norse Mythology theme called Hammer Gods is now available to play at a growing number of trusted SA online casinos, such as Mansion Casino and Casino.com. It’s one of my favourite new slots to keep an eye out for this week, and it’s playable in the real money mode and free play demo mode from as little as $/€/£0.10 per spin up to $/€/£100.00 per spin (R2.00 up to R2,000.00 per spin).

To trigger one of the game’s in-play features (aka modifiers), you need to land one of these Hammer Symbols on its respective reel. For example, the Brokkr feature will kick into action when the Red Hammer shows up on reel 2, and the Sindri feature will trigger when the Blue Hammer Symbol shows up on reel 4. There’s also a Free Spins Bonus Round to win prizes from, which will only ever kick into action when a Red Hammer Symbol lands on the reels at the same time a Blue Hammer Symbol lands. Each time this happens, you will receive 10 Free Spins.

In the Brokkr feature and the Sindri feature, some of the things you can look forward to are Symbol Transformations, Symbol Upgrades, and Super Symbols. If you want to be one of the first South African players to try out the new Hammer Gods slot, go to one of the trusted SA online casinos I mentioned above and register your free account.

If you enjoy playing this new Red Tiger Gaming slot and want more of the latest online slots from the same provider, then you may also like to try Wild Expedition, Beriched, Fortune House Power Reels, and Lion’s Hoard. If that’s not enough to keep you going, then I can also recommend keeping an eye out for NFT Megaways, Well of Wilds Megaways, Dynamite Riches Megaways, and Dragon King: Legend of the Seas.