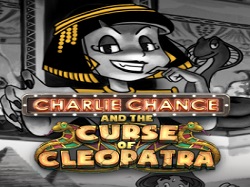 The third and latest instalment in a popular series of Cartoon/1920s-themed slots from Play’n GO is the new Charlie Chance and the Curse of Cleopatra online slot machine. The other two titles from this same series that some of you may already be familiar with now are Charlie Chance in Hell to Pay (the first instalment, which arrived in 2020) and Charlie Chance XreelZ (released in June 2010).

In addition to having a Classic Cartoon/1920’s theme, the new Curse of Cleopatra slot also has an Ancient Egyptian theme. The max win on any lucky spin is worth up to 5,500x times your total stake, and the wide betting range lets you play from as little as R2.00 ($/€/£0.10) per spin up to a maximum of R2,000.00 ($/€/£100.00) per spin. It’s available in the real money mode and free play demo mode, and it comes with 6 Cascading Reels and a Cluster Pays game engine.

It’s all about the Free Spins Bonus Round with Increasing Win Multiplier, plus some of the other in-play features (aka modifiers) you can look forward to triggering as you spin the reels are the Cleo’s Column feature, the Flying Scarab Wilds feature and the Serpent’s Trail feature. If you want to be one of the first South African players to try out the new Curse of Cleopatra slot, two of the best SA online casinos I can recommend heading over to are Casino.com or Mansion Casino.

It’s one of the best new slots to play in November, and it can be enjoyed either on desktop or mobile. This new Play’n GO slot is available in the real money mode and free play demo mode, and it takes just seconds to launch in most web browsers, no download required. If you enjoyed playing the new Charlie Chance and the Curse of Cleopatra slot and want more Ancient Egyptian-themed slots from Play’n GO, then you may also like to try Book of Dead, Legacy of Egypt, Ankh of Anubis, and Sisters of the Sun.

Other great games form various other providers include Crypt of the Dead from Blueprint Gaming, Golden Glyph 2 from Quickspin, Pyramid King from Pragmatic Play, and Age of Egypt from Playtech. If that’s not enough to keep you going, then there’s also Wild Scarabs from Microgaming, Cobra Queen from Red Tiger Gaming, Jackpot Cleopatra’s Gold Deluxe from Realtime Gaming (RTG) and Coins of Egypt from NetEnt.