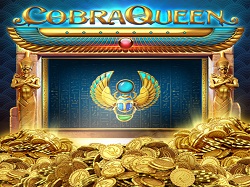 One of the best new online slots that I can recommend checking out this week, if you haven’t already, is a brand new Ancient Egyptian-themed slot from Red Tiger Gaming. It comes with a Free Spins Bonus and Locking Wilds feature, and it’s now available to play at a growing number of trusted SA online casinos, such as Mansion Casino and Casino.com.

The new Cobra Queen online slot machine is based on the Ancient Egyptian Goddess, Wadjet. It has 5 reels and 10 fixed paylines, and some of the most important symbols to keep an eye out for are the Scatter Symbols and the Wild Symbols. The most valuable symbol on the reels is the Cobra Queen Symbol, and the Scatter Symbol is the Head of the Pharaoh’s Golden Sarcophagus. As mentioned, the game does have Wild Symbols, but they only ever appear during the Locking Wilds feature.

The Locking Wilds feature will trigger whenever a 3-of-a-kind (or more) line win occurs during normal play and during the Free Spins Bonus. Each time this happens, the rightmost symbol in the line win will lock in place, and it will turn into a Wild Symbol. If you receive, for example, a $/€/£10.00 payout (or equivalent value in Rand) for the line win that triggered the feature, that same amount will also now appear attached to the Locked Wild Symbol.

You then need to try and land that same Wild Symbol in a win on the following spin to win the cash prize that’s on display. If another win is created, or if the current line win is improved, and if just one of these new line wins includes the Locked Wild Symbol, then you will win that extra cash prize again. You can also play to win big prizes during the Free Spins Bonus, which will only ever kick into action when at least 1 Scatter Symbol lands on reels 1, 3 and 5 on the same spin.

No download is required to play the new Cobra Queen slot. It was released simultaneously on desktop and mobile in March 2021, and South African players can access it either in the real money mode or free play demo mode. If you’re looking for a new Ancient Egyptian-themed slot to play this week, and if you enjoyed playing on various other similar Red Tiger slots, such as Mega Pyramid, Vault of Anubis, or Wings of Ra, then you should also enjoy playing this fun new game. Don’t forget to check it out when you next play at Casino.com or Mansion Casino. You won’t be disappointed.