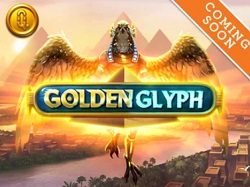 If you’re a fan of Ancient Egyptian-themed online slots such as Ark of Mystery from Quickspin or Phoenix Sun from Quickspin, then you also need to keep an eye out for the new Golden Glyph online slot from Quickspin which is scheduled to arrive in casinos on Tuesday 12th November 2019. This new Ancient Egypt-themed slot will be released simultaneously on desktop and mobile and you will be able to enjoy playing on this game as soon as it arrives next month at several top SA online casinos such as Casino.com and Mansion Casino.

This new Quickspin slot has a Cluster Pays game mechanic, along with a Tumble game mechanic, 7 reels and 7 rows of symbols. The Cluster Pays and Tumble mechanics are the same as the Cascading Reels and Rolling Reels features that you can already find on hundreds of Microgaming, Playtech and NetEnt slots, and it works as follows: For a new winning combination to form, at least 5 matching symbols must appear clustered together (either horizontally or vertically adjacent to each other).

Each time this happens, any winning symbols that are in view will disappear from view, and this will cause new symbols to fall down from above to fill those empty positions. If another winning combination forms after the Tumble, then another free Tumble will be awarded, and this will only stop happening when there are no more new winning combinations in view. Special Power Wild Symbols will also now be added to one of these empty positions with each Tumble, and if you get a win with one of these Power Wild Symbols, it will trigger a special Power-Up such as Blaze of Fire, Eye of Horus or Golden Scarab.

There’s also a Free Spins Bonus Power-Up that you can win, and unlocking this one gets you a minimum guaranteed bonus of 9 Free Spins with an Increasing Multiplier (the Golden Glyph Wild Symbol). This Increasing Multiplier can potentially boost Free Spins wins by up to 99X. There’s so much more happening on this new Quickspin slot, and I think you’re going to love it. Don’t forget that on any lucky winning spin you will also be playing to win up to 13,185x times your total bet.

While you’re waiting for Quickspin’s new Golden Glyph online slot to arrive at Casino.com, some of the other popular Ancient Egyptian-themed online slots that I can recommend keeping an eye out for in the meantime are games such as The Mummy, Daring Dave & The Eye of Ra, Queen of the Pyramids, Age of Egypt and The Pyramid of Rameses from Playtech. You may also like Pharaoh’s Daughter from Rarestone Gaming (a Playtech company), Pyramid: Quest for Immortality, Coins of Egypt, Lost Relics and Mercy of the Gods from NetEnt.