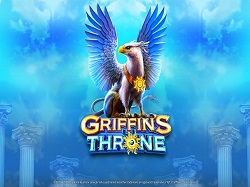 If you’re a fan of IGT slots or Greek Mythology-themed slots, then you may also want to check out this new game as soon as it’s released on Monday, September 28th. Arriving on this date at several top SA online casinos such as Casino.com is the new Griffin’s Throne online slot from IGT. It will be arriving simultaneously on desktop and mobile, and it’s together with its popular theme, sharp graphics and fun accompanying sound effects, the game will no doubt be instantly appealing to lots of players.

The new Griffin’s Throne slot comes with an Expanding Reel set during the Multiplier feature, which sees 2X, 3X, 4X, 5X and 10X Multipliers being added to the reels, plus there’s also a Free Spins Bonus Round to win prizes from. When you take your first spin on this new IGT slot, you will notice that there are 5 reels stacked by up to 4 rows of symbols high and just 30 active paylines.

However, when the Sun Symbol lands anywhere in view, the reel that it lands on will instantly expand to give you even more active paylines (at no extra cost). You will also notice that the Wild Symbols and the Griffin Symbols that are currently in view as the reel expands will now lock in place for the next spin. The expanded reel will now spin once independently to reveal multipliers and wild symbols, which can combine to help generate some really big wins for you.

The maximum number of paylines that certain lucky spins can be played with is 90, and on any lucky spin, you will be playing to win up to 3,750x times your total stake. The Wild Symbol is the word ‘Wild,’ and it will substitute all other symbols on the reels to help form new winning combos. The only symbol that the Wild Symbol will NOT substitute is the Temple Scatter Symbol.

Finally, there’s also a Free Spins Bonus Round to win prizes from, and you’ll receive 10 re-triggerable Free Spins whenever 3 or more Scatter Symbols land anywhere in view on the same spin. I’m already a big fan of the new Griffin’s Throne online slot, and I can’t wait for it to arrive. Some of the other popular Greek Mythology-themed slots that I can recommend checking out while you’re waiting for this new IGT slot to arrive are any of the Age of the Gods slots from Playtech (especially the Glorious Griffin online slot), Gods of Olympus from Blueprint Gaming, and Greek Gods from Pragmatic Play.

You may also like to try Mighty Griffin from Blueprint Gaming, Phoenix Fire Power Reels from Red Tiger Gaming, Ancient Fortunes: Zeus from Triple Edge Studios, and Ways of the Phoenix from Playtech.