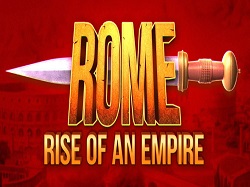 Available now at a growing number of fully licensed SA online casinos is the new Rome: Rise of an Empire online slot from Blueprint Gaming. This exciting new game is packed with lots of exciting in-play features that are known as modifiers and altogether there are 5 reels and 20 fixed paylines. No download is required to play on this game and you can take one spin of the reels from jut 0.20 coins up to a maximum of 500.00 coins per spin.

You can play on the new Rome: Rise of an Empire online slot either on desktop or on mobile and it’s available in the real money mode and in the free play demo mode at trusted SA casino sites such as Casino.com and Mansion Casino. If you enjoyed playing on Blueprint Gaming’s Fortunes of Sparta, Kingdom of Fortune or Vikings of Fortune online slots then we’re also fairly certain that you’re going to love playing on this exciting new slot too.

The Wild Symbol is the Golden Eagle and the only other special symbol to keep an eye out for on the reels is the Bonus Symbol (the Golden Coliseum Symbol). There’s also a Tiger which can randomly appear during any spin to award 1 of 5 in-play modifiers. The types of in-play features that the tiger can randomly award include the Sword Strike, Legions Glory, Spears of Destiny, Symbolus Maximus or Bonus Boost features.

The fun really begins on this new Blueprint Gaming slot when three or more of the Bonus Symbols land in any position across any of the 5 reels at the same time. Here you can play to win 1 of 5 exciting bonus features by moving up the ladder and you can win either the Big Money Bonus, the Urn Riches Bonus, the Empress’s Treasure Bonus, the Uprising Bonus or the Volcanic Cash Bonus.

To play on the new Rome: Rise of an Empire online slot or on any of the other similar Blueprint slots that were mentioned above, go to Casino.com or Mansion Casino and register your free account. You may also want to keep an eye out for several other popular online slots from Blueprint Gaming such as Ted, The Goonies, Worms Reloaded, The Pig Wizard, Wish Upon a Jackpot, Buffalo Rising Megaways, King Kong Cash, Paws of Fury, Slots O’ Gold Megaways, Mars Attacks and The Naked Gun.