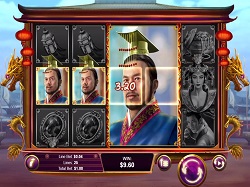 RTG (Realtime Gaming) recently increased its impressive portfolio of Asian themed online slot machines on Wednesday 16th January, 2019, with the release of the new Wu Zetian online slot. This particular game takes place in what has become known as the Golden Age in Chinese history and the main character is one of the most powerful and feared Chinese Empresses, Wu Zetian, who was the only female to sit on the throne in her own right after ruling over the Tang Dynasty.

This brand new online slot has 5 reels and 25 fixed paylines and it’s available in the real money mode and in the free play demo mode at several top-rated SA online casinos such as Yebo Casino and Springbok Casino. “Wu Zetian allows players to experience the Golden Age and enjoy some of the riches and wealth the Empress amassed during her period on the throne,” said the Springbok Casino manager, Daniel Van Wyke. “It is a visually stunning slot that also delivers thrilling and exciting gameplay that will keep players engaged and entertained,” added Daniel. These comments came from the official Springbok Casino website.

Some of the symbols on reels 2, 3 and 4 (the three middle reels) can appear slightly larger than the usual symbols that measure 1X1. These different sized symbols can measure 3X2, 3X3, 3X4 or 3X5 for some really big payouts, but only when landing on reels 2 and 3 or on reels 3 and 4. Also keep an eye out for the Pearl Wild Symbol which can appear stacked and can substitute all other symbols on the reels apart from the Gong Scatter Symbol.

A guaranteed bonus of 5 Free Spins will instantly be awarded when three or more Scatter Symbols land in any position across the reels at the same time and during this bonus round those same three middle reels become connected to hopefully help generate some Super Mega Big Wins. Remember to keep an eye out for the new Wu Zetian slot when you next play at any of our reviewed RTG casinos.