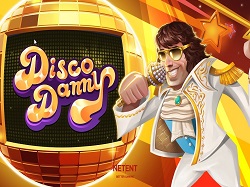 The new Disco Danny online slot from NetEnt is a Saturday Night Fever/Disco/1970s-themed slot that first arrived at some of our most trusted SA online casinos as recently as Tuesday, September 1st, 2020. It’s a classic slot that has just 3 reels and 3 fixed paylines, and the good news is that it’s possible to win up to 4,500x times your total stake on any lucky spin.

South African players can access this new NetEnt slot either on desktop or mobile right now at Casino.com and Mansion Casino. It takes just seconds to launch in most web browsers, no download required, and you can enjoy playing on this game either in the real money mode or free play demo mode from as little as $/€/£0.10 per spin up to a maximum of $/€/£250.00 per spin (or equivalent value in Rand).

During the bonus, the Free Spins counter will keep on resetting to 3 each time another Golden Scatter Symbol lands. If you live in South Africa, and if you would like to play on a wide range of NetEnt slots right now, including the new Disco Danny online slot machine, go to Casino.com or Mansion Casino. If you enjoy playing on this game, then I can also recommend keeping an eye out for several other new NetEnt slots such as Irish Pot Luck, Willy’s Hot Chillies, Cash Noire, and Gems of Adoria. Other hot titles from NetEnt include Jumanji, Mega Fortune, Gonzo’s Quest, and Starburst.