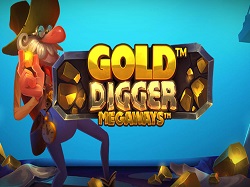 If you enjoyed playing the Gold Digger online slot from iSoftBet that first arrived at some of our featured SA online casinos back in 2020, and if you’re a fan of iSoftBet slots or Megaways slots, then you’re going to LOVE what we’ve found for you right here. Available now at Casino.com and Mansion Casino is the new Gold Digger Megaways online slot machine.

The game has 6 reels and anywhere from 324 Megaways (different ways to win per spin) up to a maximum of 117,649 Megaways. Each time a winning combo forms anywhere on the reels, the winning symbols that are in view will be removed from the reels, which then causes more new symbols to cascade down from above and ill the empty positions. The same process will keep on repeating for free until there are no more new wins in view.

This fun new iSoftBet slot is available in the real money mode and free play demo mode and you can take one spin of the reels from as little as R4.00 ($/€/£0.20) up to R400.00 ($/€/£20.00) per spin. The top coin prize up for grabs on any lucky spin is worth more than 10,000x times your total stake, and some of the things you can look forward to triggering as you spin the reels are four in-play bonus features (known as Mining Modifiers) and a Gold Hold & Wins Respins Bonus.

The four modifiers that can randomly trigger on any lucky spin during normal play are the Boomer Bonus Add feature, the Boomer Lose to Win feature, the Mystery Blast feature, and the Max Megaways feature. To gain entry to the respins bonus feature, you need to land 5 or more Golden Nugget Scatter Symbols anywhere in view on the same spin. Each Golden Nugget displays either a Cash Prize (worth anywhere from 1x up to 20x times your total stake) or a Jackpot Symbol (Minor, Major, or Mega), and the aim is to try and land as many of these symbols as possible before you run out of respins.

The Mega Jackpot is worth 100x times your total stake. You then have the Major Jackpot at 50x, and the Mini Jackpot at 25x. As soon as the Gold Hold & Win Respins feature kicks into action, the symbols that triggered the feature will lock in place and you will go on to play at least 3 respins. Each time another Golden Nugget lands, it too will lock in place and reset the respin counter to 3. All prizes that are in view when the feature ends will be tallied up and paid out as one big prize.

If you want to be one of the first South African players to try out this fantastic new Gold Mining-themed slot, go to one of the trusted SA online casinos I mentioned above and register your free account. If you enjoy playing the new Gold Digger Megaways slot and want more Megaways slots from iSoftBet, then you may also like to try Neptune’s Fortune Megaways, Moriarty Megaways, Majestic Megaways, and Western Gold Megaways. If that’s not enough to keep you going, there’s also Aztec Gold Megaways, Dragon Match Megaways, and Wild Hammer Megaways.