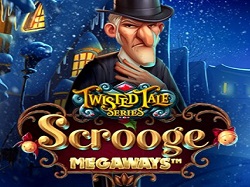 Coming soon to two of our featured SA online casinos is the new Scrooge Megaways online slot machine from iSoftBet. If you hadn’t already guessed by the title, this new iSoftBet is based on the Charles Dickens novel, A Christmas Carol, which was originally published back in 1843. The new Scrooge Megaways slot from iSoftBet has 6 reels and up to 117,649 different ways to win per spin (aka Megaways), and you will soon be able to take one spin of the reels either in the real money mode or free play demo mode from as little as R4.00 up to a maximum of R400.00 per spin ($/€/$0.20 up to $/€/£20.00 per spin).

It will be released simultaneously on desktop and mobile next week, and on any lucky spin, you will be playing to win up to 12,000x times your total stake. The game will take just seconds to launch in most web browsers, no download required, and some of the best places to play if you’re based in South Africa will be Casino.com and Mansion Casino. The main bonus feature in this game is a Streak Respins feature, and the special symbols to keep an eye out for as you spin the reels are the Wild Symbols and four different Scatter Symbols – the regular Scatter Symbols, and also the Past, Present, and Future Scatter Symbols.

This epic new iSoftBet slot also comes with a Cascading Reels game engine, which kicks into action each time a new winning combo forms. Any winning symbols that land will instantly be removed from the reels, which then causes more new symbols to cascade down from above and fill the empty positions. If this creates another winner, then the same process will repeat, and the reels will only stop cascading when there are no more new wins in view.

The game also has a couple of other fun in-play features (aka modifiers) to look forward to. They include the Bonus Awards feature and the Max Megaways feature. While you’re waiting for the new Scrooge Megaways slot to arrive, why not check out some of these other popular Megaways slots from iSoftBet in the meantime. Some of their best Megaways slots are The Ruby Megaways, Moriarty Megaways, Queen of Wonderland Megaways, Wild Hammer Megaways, and Western Gold Megaways. If you want more Christmas-themed slots, then you may also like to try A Christmas Carol from Playtech, Christmas Carol Megaways from Pragmatic Play, and Secrets of Christmas from NetEnt.