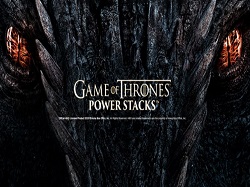 If you enjoyed playing on the original Game of Thrones online slot from Microgaming, and if you’re always looking to play on some of the very latest online slots, then you should be pleased to learn that Microgaming recently announced that a follow-up to the Game of Thrones slot that was first released in 2014 is coming soon.

“The Game of Thrones brand has garnered a devoted following among viewers, along with incredible media attention. We are excited to extend our partnership with HBO to supply a new Game of Thrones online slot that honours and builds on the brand’s immense popularity,” said the Chief Commercial Officer at Microgaming, Jean-Luc Ferriere. “In the spirit of the show, we will be working hard to deliver a quality, feature-rich slot game so that players can enjoy an authentic Game of Thrones themed gaming experience,” added the CCO.

The new Game of Thrones Power Stacks online slot is being developed exclusively for Microgaming by Slingshot Studios, which means that when the game is eventually released (later on this year), South African players will have access to it at trusted SA online casinos such as Casino.com. You will be able to launch the new Game of Thrones Power Stacks slot instantly in your web browser, without the need to download any online casino software onto your Windows or Mac-operating desktop or laptop computer, and you will have access to this new slot in the real money mode and free play mode.

While you’re waiting for the new Game of Thrones online slot from Slingshot Studios, some of the other popular branded online slots that I can recommend keeping an eye out for in the meantime include titles such as Bridesmaids, Lara Croft: Temples and Tombs, Jurassic Park, Jurassic World, Highlander, Halloween, Phantom of the Opera, Battlestar Galactica, and Playboy (all from Microgaming), as well as Jumanji, Planet of the Apes, Vikings, Conan, The Invisible Man, Ozzy Osbourne, Guns N’ Roses, and Motörhead from NetEnt.