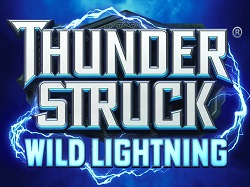 The new Thunderstruck: Wild Lightning online slot machine is one of the hottest new online slots that South African players have access to in July 2021. It’s the follow-up to several other Thunderstruck slots from Microgaming (Thunderstruck, Thunderstruck II, and Thunderstruck II Remastered), and this exciting new version was developed by Stormcraft Studios, which also brought you several other hit titles, such as Jungle Jim and the Lost Sphinx, Fortunium Gold: Mega Moolah, and Agent Jane Blonde Returns.

The new Thunderstruck: Wild Lightning online slot is even more feature-packed than any of the other Thunderstruck slots, and some of the things you can look forward to are FOUR different Free Spins Bonus Rounds, the Multiplier Wild feature, the Wild Lightning feature, and the Link & Win feature, which can lead to triggering the Thunderball Jackpots feature, where you can win the Mega Jackpot (which is worth an impressive 15,000x times your stake), the Major jackpot (150x), the Minor Jackpot (50x), or the Mini Jackpot (25x).

You can unlock extra symbols during the feature, and if you manage to unlock ALL available symbols positions AND land a Mega Jackpot Symbol, you will instantly be awarded the game’s top prize. If you’re lucky enough to land 3 or more Scatter Symbols anywhere in view on the same spin during normal play, you will gain entry to the first level of the Free Spins Bonus. At each new level, you can look forward to more Free Spins and bigger Win Multipliers.

You also have the Lightning Wild feature, which can randomly strike at any time during normal play. Once triggered, up to three of the reels will turn completely wild, which should result in forming a new winning combo for you. If you want to be one of the first South African players to try out the new Thunderstruck: Wild Lightning slot, go to Casino.com today and register your free account.

If you’re looking for more Norse Mythology-themed slots, then you may also like to try Vikings from NetEnt, Lightning Strike Megaways from Blueprint Gaming, and Age of the Gods Norse: Gods and Giants from Playtech. I can also recommend keeping an eye out for Thor’s Vengeance from Red Tiger Gaming, Asgard Deluxe from Realtime Gaming (RTG), and Power of Thor – Megaways from Pragmatic Play, to name just a few great games.