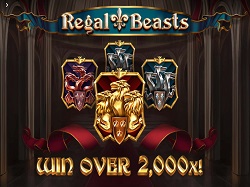 One of the best new online slots that South African players have access to in December 2020 is the new Regal Beasts online slot from Red Tiger Gaming. It was released simultaneously on desktop and mobile, and it’s now available to play either in the real money mode or free play demo mode at a growing number of trusted SA online casinos such as Casino.com.

The game has single, double and triple value symbols, which is what Red Tiger Gaming has called the Symbol Strength game mechanic. For example, all paying symbols (e.g. the J’s, Q’s, K’s, A’s, and the four different coloured beasts), AND the Wild Symbols and the Scatter Symbols, have single, double and triple versions of themselves. A double symbol landing anywhere in view counts as two symbols, and a triple symbol landing counts as three symbols, which means that just one triple symbol landing may form a line win on its own.

Also, a double Regal Spins Scatter Symbol counts as 2, and a triple as 3. Each Scatter Symbol landing awards 3 Free Spins, and you need a minimum of three landing on the reels at the same time to get a guaranteed bonus of 9 Free Spins. It sounds more complicated than it actually is, and it won’t take long to figure out. The good news is that the double and triple Scatter Symbols can lead to triggering up to 45 Free Spins! That’s not all. During the bonus, all single paying symbols are automatically upgraded to double-paying symbols for the chance to land even bigger winning combos, plus additional Free Spins can also be retriggered. You will also notice that the Wild Symbols have been upgraded to triple paying symbols.

The other notable feature that you can look forward to during normal play is Regal Wilds feature, which will kick into action whenever the Golden Orb makes an appearance below reel 3. When this fun in-play feature triggers, additional Wild Symbols will immediately be flung out onto random positions on the reels, and this will hopefully help form a new line win for you. The new Regal Beasts online slot has 5 reels and 10 fixed paylines, and it’s playable either in the real money mode or free play demo mode from as little as $/€/£0.10 up to $/€/£40.00 per spin.

To play on this new Red Tiger Gaming slot and for more than 50 other epic titles right now, go to Casino.com today and register your free account. If you’re looking for more of the latest online slots from Red Tiger, then you may also like to try Leprechaun’s Magic Megaways, Hoard of Poseidon, Golden Tsar, and 10,001 Nights. There’s also Aurum Codex, Path of Destiny, Yucatan’s Mystery, and Clash of the Beasts, to name just a few great games.