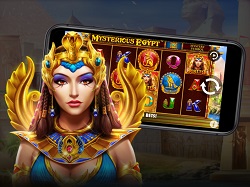 If you’re a fan of Ancient Egyptian-themed online slots and online slots from Pragmatic Play, then you should like what we’ve found for you. The new Mysterious Egypt online slot from Pragmatic Play was released simultaneously on desktop and mobile as recently as Thursday, January 14th, and it’s now available to play either in the real money mode or free play demo mode at several top SA online casinos such as Casino.com and Mansion Casino.

This brand new Ancient Egypt-themed slot from Pragmatic Play comes with Mystery Symbols that can expand to cover entire reels from top to bottom and a Scatter Symbol that doubles up as a Wild Symbol. There’s also a Free Spins Bonus with 2 randomly selected Expanding Symbols. The game has 5 reels and 10 fixed paylines, and you can take one spin of the reels from as little as $/€/£0.10 per spin up to a maximum of $/€/£100.00 per spin (or equivalent value in Rand).

No download is required to play on this game, which takes just seconds to launch in most web browsers, and the top coin prize that you can play to win is worth more than 5,500x times your total stake. There’s a special area located just above the main reel set where the Mystery Symbols appear. Each time you hit the spin button, this area will also spin to reveal a randomly selected Mystery Symbol.

If the matching symbol also happens to land on the reels below, it will instantly expand to fill the reel from top to bottom. You need at least 3 Expanding Symbols to land anywhere in view to trigger a line win, and the good news is that they don’t have to land in consecutive order across adjacent reels. For example, they wouldn’t have to land on reels 1, 2 and 3 to form a win. Winning combos can form when landing on reels 3, 4 and 5, on reels 2, 4 and 5, or for example, on reels 1, 3 and 5, and so on.

In the Free Spins Bonus, TWO Mystery Expanding Symbols will be chosen for you. This exciting bonus feature will instantly trigger when 3 or more Egyptian Queen Scatter Symbols land anywhere in view on the same spin. Don’t forget, the Scatter Symbol also acts as a Wild Symbol, and it will substitute all other symbols on the reels. If you live in South Africa and fancy having a few spins on the new Mysterious Egypt slot right now, go to Casino.com or Mansion Casino.