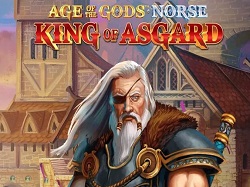 The new Age of the Gods: Norse King of Asgard is a brand new Age of the Gods jackpot slot that first appeared online in February 2020. This new progressive jackpot slot was developed by Ash Gaming, and it’s brought to you by Playtech. It can be launched either instantly in your web browser or from within the Playtech casino download client, and it’s available now at Casino.com.

If you live in South Africa, you can play on the new Norse King of Asgard online slot either in the real money mode or free play demo mode, and altogether there are 6 reels and 50 paylines. Low rollers can play from as little as 0.50 per spin, and high rollers can spend up to as much as 500.00 coins per spin. On any lucky spin, you will be playing to win 1 of 3 individual jackpots, and the main bonus feature apart from the jackpot bonus is the Odin’s Fury Respins feature.

Unlike the other 12+ Age of the Gods slots, which have an Ancient Greece/Greek Mythology theme, this latest instalment has a Norse Mythology theme, and a slightly different progressive jackpot prize structure. For example, the Extra Jackpot has to be won before it reaches the amount shown, and the Daily Jackpot has to be won every day before it reaches a certain time. The Ultimate Jackpot has no restrictions and can climb to no fixed amount before being won.

There are no Scatter Symbols or Bonus Symbols, which means that the game doesn’t have a Free Spins Bonus to win prizes from. The Progressive Jackpot Bonus game can only ever randomly trigger, and the Odin’s Fury Respins feature will only ever trigger when a Fully Stacked Odin Wild Symbol is completely covering reels 2, 3, 4, 5 and/or 6. As soon as this triggers, Odin will stay in view during the respins. He will turn into a Stacked Shifting Wild Symbol, and will gradually move across the screen by one reel at a time with each new respin.

He gets pushed back to the previous reel if a regular Loki Wild Symbol happens to land to the left of Odin, and when he eventually makes it over to reel 1, the respins feature will end. That’s not all though. With each new respin that occurs, you will also notice that the Win Multiplier is increasing by one value. When Odin makes it over to reel 1, the Win Multiplier that you have earned throughout the respins feature will automatically be applied to your win, to boost your overall winnings even further.

I’m already a big fan of this new Playtech slot, and I’ve got a sneaky feeling that you’re going to love it too, especially if you enjoyed playing on any of the other Age of the Gods jackpot slots, or titles such as Thunderstruck II from Microgaming or Vikings Unleashed Megaways from Blueprint Gaming. You may also like Thor’s Lightning from Red Tiger Gaming, Asgard from Playtech, and Forbidden Throne from Microgaming, to name just a few similar titles.