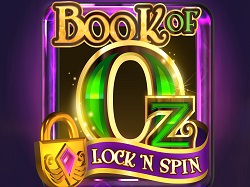 If you live in South Africa, you will be able to enjoy playing on the new Book of Oz Lock ‘N Spin slot either on desktop or mobile at Casino.com. There are 5 reels and 10 fixed paylines, and you will be able to play in the real money mode from as little as 0.10 coins up to a maximum of 25.00 coins per spin. The Scatter Symbol is the Golden Book, and it also acts as the Wild Symbol.

The Wild Symbol can substitute all other symbols on the reels and at least three of these symbols must land anywhere on the reels at the same time to trigger the main Free Spins Bonus. During normal play on the original version, you could respin any of the five reels at the start of each spin for an extra cost. However, on this new version you can Lock ‘N Spin anywhere from one to four of the reels for a chance to improve your current win or trigger the Free Spins Bonus. Just be warned though, that using the Hyperspins™ feature too often can get expensive.

When the main Free Spins Bonus has triggered, the system will randomly select one symbol for you. The chosen symbol will now appear as an Expanding Symbol each time it shows up during the Free Spins Bonus. If you’re not happy with the symbol that was selected, use the new Second Chance feature to get a different symbol. This looks like another fun online slot from Triple Edge Studios and I can’t wait for it to arrive.

It was developed exclusively for Microgaming, and while you’re waiting for this new online slot to arrive at Casino.com, some of the other popular Triple Edge Studios slots that I can recommend checking out in the meantime include Halloween, Wicked Tales: Dark Red and Bookie of Odds. There’s also Ancient Fortunes: Zeus, Action Ops: Snow & Sable, Playboy Gold and Lara Croft: Temples and Tombs, to mention just a few of my favourites.