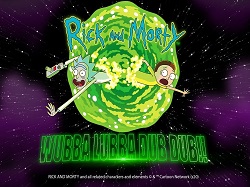 The new Rick and Morty Wubba Lubba Dub Dub online slot machine was developed by Blueprint Gaming, and it first arrived at some of our reviewed SA online casinos in late November 2020 (Monday 30th). It’s by far one of the most entertaining new slots out there today, and altogether, you can look forward to a whopping 15 in-play features and bonus rounds.

If you’re a fan of the long-running animated television series, Rick and Morty, and if you enjoyed playing on the Rick and Morty Megaways slot that first arrived in casinos in late February 2020, then you’re going to love this exciting new version, which is even more feature-packed than the original. South African players can access this new Blueprint Gaming slot either in the real money mode or free play demo mode, and the wide betting range lets you take one spin of the reels from as little as $/€/£0.10 up to a maximum of $/€/£200.00 per spin (or equivalent value in Rand).

The most exciting thing about the new Rick and Morty Wubba Lubba Dub Dub slot is the main bonus feature, which will instantly kick into action each time 3 or more Bonus Symbols show up in any position across the reels on the same spin. You will now be able to win 1 of 6 exciting bonus rounds, which include the Anatomy Wild Monster Spins feature, the Mr MeeSeeks Free Spins feature, the Pilot Bonus, the Rick N Roll Mega Bucks Bonus feature, the Evolution of the Pick Wild Spins feature, and the Rick, Rattle and Roll Bonus Chase feature.

The game has 5 reels and 20 fixed paylines, but during one of the Free Spins Bonus rounds (the Evolution of the Pickle Wild Spins feature), you will be playing with 40 paylines. No download is required to play on this new slot, which takes just seconds to launch in most web browsers, and you can enjoy playing right now either on desktop or mobile over at Casino.com.

If you enjoy playing on this new branded online slot and want more from Blueprint Gaming, then you may also like to try Top Cat, Mars Attacks, Spinal Tap, The Goonies, Beavis and Butthead, and Ted. There’s also The Naked Gun, Deal or No Deal, Carry on Camping, and Viz, to name just a few hot titles.