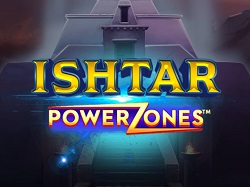 It comes with 3 in-play features (aka modifiers) that will instantly trigger when the two torches either side of the two outer reels light up, plus there’s also the Power Zones game engine. It has 6 reels and up to 15,625 different ways to win per spin, and the wide betting range caters to everyone from low rollers to high rollers. For example, the maximum cost per spin is capped at $/€/£500.00, which is ideal of high rollers, and the good news is that low rollers can play from as little as $/€/£0.20 per spin.

When you convert these amounts into South African Rand at today’s average exchange rate, it means that you can take one spin of the reels from as little as R4.00 up to a maximum of R10,000 per spin. Two of the most important symbols to keep an eye out for as you spin the reels are the Wild Symbols, which can only ever land during the Random Wilds feature, and also the symbols that are highlighted in FLAME.

Although it doesn’t always create a new winning combo, you will find that most of the time, it does. Power Zones can also connect with each other either horizontally or vertically to create even bigger Power Zones, and each time the Power Zones have been activated, they will be removed from the reels for the next spin so that you can start the process over again. The more Power Zones you manage to create, the bigger your winning combos can potentially be.

This brand new Ash Gaming slot is available on desktop and mobile, and it can be launched either instantly in your web browser or from within the Playtech casino download client. South African players can enjoy playing either in the real money mode or free play demo mode and don’t forget that on any lucky spin, it’s possible to win up to 10,000x times your total stake. It’s one of the best new online slots to play in June, so remember to give it a few spins when you next play at either of the trusted SA online casinos that I mentioned above.