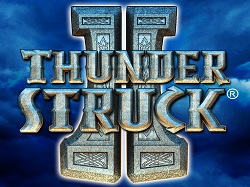 The much-loved Thunderstruck 2 online slot from Microgaming was recently upgraded with a shiny new look and feel. It’s the same great game that some of you have come to love since it was first released almost exactly a decade ago (2010). The only noticeable differences are smoother gameplay and better graphics/animations. Everything else with regards to the symbols, the betting range, and the in-play features and bonus rounds have remained unchanged.

If you haven’t ever played on the Thunderstruck 2 slot before, here are some of the things that you can look forward to. It has 5 reels and 243 different ways to win per spin, and it’s playable from as little as $/€/£0.15 per spin up to a maximum of $/€/£60.00 per spin (or equivalent value in Rand). The game can be launched either instantly in your web browser or from within the Microgaming casino download client, and it can be enjoyed either on desktop or mobile.

The Thunderstruck 2 Logo is the Wild Symbol, and it will substitute all other symbols on the reels apart from the Thor’s Hammer Bonus Symbols. These two special symbols can land in any position on reels 1, 2, 3, 4 and 5. One of the rewarding features in this game is the Wildstorm feature. Once triggered, 1, 2, 3, 4 or 5 of the reels will turn completely wild for the following spin to bring in a guaranteed win.

There’s also the Chamber of Spins Bonus, which will instantly trigger each time 3 or more Bonus Symbols show up anywhere in view on the same spin. On the first ever trigger, you will be awarded 10 Free Spins and a 5X Win Multiplier (otherwise known as the Valkyrie feature). After the Chamber of Spins feature has been triggered for the 5th time, the Loki feature will be unlocked, which comes with 15 Free Spins and the Wild Magic feature.

After it has been triggered a 10th time, you’ll have access to the Odin feature with 20 Free Spins and the Wild Raven feature, and after the 15th trigger, you’ll have access to Thor’s feature with 25 Free Spins, Rolling Reels, and an Increasing Multiplier. The new Thunderstruck 2 Remastered online slot is one of the best Norse Mythology-themed slots out there today, so don’t forget to check it out when you next play at Casino.com.

If you’re looking for more similar games to play at this trusted SA online casino, and aren’t too bothered about who makes the games, then you may also like to try Age of the Gods: Norse Gods and Giants from Playtech, Ring of Odin from Play’n GO, and Thor’s Lightning from Red Tiger Gaming. There’s also Hall of Gods from NetEnt, Asgard from Pragmatic Play, and Lightning Strike Megaways from Blueprint Gaming, to name just a few top titles.