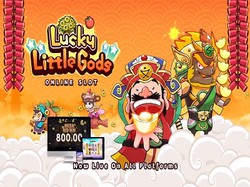 South African players have plenty of new online slots to look forward to over the coming weeks and months with new games coming from Realtime Gaming (RTG), Playtech, Microgaming and NetEnt. Some of the slots have already been released and will be available any day now and others will gradually continue to be released throughout January and February.

For example NetEnt recently launched the new Twin Spin Deluxe slot and this is likely to be available any day now at Caribic Casino. Also coming soon from NetEnt to Caribic Casino is the new Asgardian Stones slot and the new Universal Monsters: The Phantom’s Curse slot. That’s not all though. Microgaming will also soon be releasing the new Deco Diamonds slot and then following on from this is the new Lucky Little Gods slot which is expected to arrive on February 1st.

Realtime Gaming will be releasing the new Fu Chi slot on January 24th and then on January 31st you can look forward to the new Fantasy Mission Force slot. The other new RTG slot that’s coming soon to Punt Casino, Thunderbolt Casino, Yebo Casino and Springbok Casino is the new Shanghai Lights slot. This one is scheduled for release on February 7th.

Speaking recently about the new Jackie Chan theme slot, Fantasy Mission Force, was the Springbok Casino manager and spokesperson, Daniel Van Wyke. He said, “Fantasy Mission takes inspiration from the popular Jackie Chan martial arts films of the early 1980’s, and transports players right to the heart of the action.” He then went on to say, “The game also packs a punch when it comes to features and jackpots, offering players the chance to win big prizes while they defeat evil.” All of these comments were taken directly from a recent Springbok Casino press release.

All of these new online slot machines will be made available in the real money mode and in the free play demo mode and they will all be launched on desktop and on mobile. To find out more about any of the fully licensed online casinos that were mentioned above head over to our South African online casino review section right now. These top-rated SA online casinos are all free to sign up to and they all currently have some massive new player welcome bonuses up for grabs.