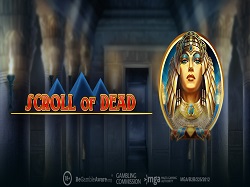 If you’re looking for a new online slot to play this weekend, and if you’re a fan of online slots from Play’n GO, then you need to check out the new Scroll of Dead online slot machine. This brand new Ancient Egyptian-themed slot was originally released on desktop and mobile in May 2021, but it has only just started becoming more widely available in June 2021. If you want to be one of the first South African players to try out the new Scroll of Dead slot, go to Casino.com today and register your free account.

This brand new Play’n GO slot is all about the Free Spins Bonus with a special Expanding Symbol, and the top coin prize up for grabs in this game is worth a cool 7,500x times your total stake. It’s available in the real money mode and free play demo mode, and the wide betting range lets you take one spin of the reels from as little as R2.00 up to a maximum of R2,000 per spin ($/€/£0.10 per spin up to $/€/£/100.00 per spin).

The two joint-highest valued symbols on the reels are the Cleopatra Symbol and the Scarab Beetle, the latter of which doubles up as a Scatter Symbol and Wild Symbol. It can land in any position across any of the 5 reels, and it will substitute all other symbols on the reels to help form new winning combos for you. If you look just next to reel 5 (the rightmost reel), you will also notice that there’s a 6th Bonus Reel.

The 6th reel remains LOCKED during normal play, and is UNLOCKED during the Free Spins Bonus, which will instantly kick into action when 3 or more Scatter Symbols land anywhere in view on the same spin. 3, 4, or 5 Scatter Symbols landing on the reels at the same time gets you a minimum guaranteed bonus of 8 Free Spins and also a guaranteed cash prize worth 2X, 20X, or 200X times your total current stake.

Just before the feature can begin, one symbol will be randomly selected for you. Each time this randomly selected symbol shows up during the feature, it will expand to fill the entire reel from top to bottom. You need 3 or more Expanding Symbols to land to win a prize, and they don’t need to start from the leftmost reel. They also don’t need to land on consecutive reels. For example, they could land on reels 1, 4 and 6, on reels 3, 4, and 6, or reels 2, 3, and 5, and you would receive a payout.

If you enjoy playing the new Scroll of Dead online slot at Casino.com, and want more similar games, then you may also like to try [Rich Wilde and the] Book of Dead, Cat Wilde and the Doom of Dead, Legacy of Egypt, Ankh of Anubis, and Dawn of Egypt. “The Egyptian theme is one of the most popular themes in slot entertainment. Despite the variety of these titles in the market, our Dead series of games continues to perform with every release,” said the Head of Games at Play’n GO, Charlotte Miliziano.

“By offering a different aspect to the entertainment, linking these games while still creating new experiences, we give players ideas and concepts that they want to explore and return to whenever they see the opportunity,” added Miliziano. She then finished by saying, “It’s important to give players something they can trust in and look forward to, something they’ll want to play again.” These comments came directly from the official Play’n GO website.