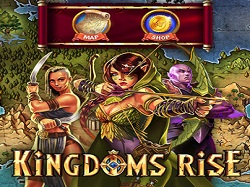 The new Kingdoms Rise online slot machine series from Origins and Playtech can now be found at several top SA online casinos such as Mansion Casino and Casino.com. All three of these new Playtech slots are connected to the same progressive jackpot network, and at any one time you will be playing to win the Daily Strike Jackpot, the Power Strike Jackpot and the Epic Jackpot, the latter of which is the largest of the three jackpots, and it can climb to no fixed amount before being won.

The Epic Jackpot is currently at around R2,025,616.05 (and climbing by the second). The Power Strike Jackpot must be won before each reaches £2,000 (or equivalent currency value in Rand) and the Daily Strike Jackpot must be won every day before midnight (GMT). If you fancy a chance at winning any of these progressive jackpots right now, the games that you need to keep an eye out for when you next play at Casino.com or Mansion Casino are Kingdoms Rise: Guardians of the Abyss (5 reels and 25 paylines), Kingdoms Rise: Sands of Fury (5 reels and 20 paylines) and Kingdoms Rise: Forbidden Forest (5 reels and 576 Win Ways).

One of the main aims on these games is to try and collect as many gold coins as possible as you spin the reels. These coins are attached to certain symbols, and they will be auto-stored for you each time they show up. As soon as you have collected a sufficient number of gold coins, you can then head straight to the Kingdoms Rise shop where they can be exchanged for in-play features, some of which include Respins, Locked Symbols, Multipliers, Random Wilds and Roaming Wilds.

All three of these new online slots from Origins and Playtech are available on desktop and mobile, they can be launched either instantly in your web browser or from within the Playtech casino download client, and you can enjoy playing on them either in the real money mode or free play demo mode. These games all have wide betting ranges, and they all arrived on the same day towards the end of October 2019. If you live in South Africa and feel like checking out either of these new jackpot slots right now, go to Mansion Casino or Casino.com. I managed to obtain the following extract of comments directly from the official Playtech website, where they can be read in full.

The Casino Director at Playtech, James Frendo, said: “Innovation is always at the forefront of Playtech’s games development process and, in Kingdoms Rise, we are proud to be delivering an industry-first concept for players and licensees alike. The suite’s token system gives players the power of choice like never before – they decide what feature to play, when to play it and in which game. Some players may want to try a feature as soon as they have enough tokens; others may prefer to build up a balance and play several features at once. The key point is, the choice is theirs...”

He continued…“For players, the chance to “earn” extra in-game features and potentially significantly boost their win potential will be a key point of differentiation. The opportunity to gain more tokens, which can be redeemed in any Kingdoms Rise game, is a clear incentive to try all games in the suite. The success of multi-game brands such as Age of the Gods clearly demonstrates the value and potential of original content and, with its uniquely enhanced player experience, we’re confident that Kingdoms Rise will have the same strength of appeal.”