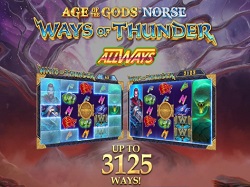 Playtech and Playtech’s subsidiary companies Ash Gaming, Vikings and Origins, have developed a popular series of Ancient Greece/Greek Mythology-themed online slots in the Age of the Gods series, but two of their very latest Age of the Gods jackpot slots have a Norse Mythology themed instead. In early February 2020, South African players were treated to the new Age of the Gods: Norse – King of Asgard online slot.

Towards the end of the month, another new title was added to this series – a game called Norse – Ways of Thunder. The new Age of the Gods: Norse – Ways of Thunder online slot was released simultaneously across multiple platforms (Flash, download and mobile), and it can now be found at several trusted SA online casinos such as Casino.com and Mansion Casino.

This new Playtech slot has an All Ways™ game mechanic with 5 reels and anywhere from 720 win ways up to a maximum of 3,125 different win ways. The main reel set can expand with multiple consecutive wins, and this means that additional symbols can be unlocked at no extra cost to the player. The game has Wild Symbols and Scatter Symbols, and the main bonus features that you can look forward to are a Free Spins Bonus, a Respins feature, and a Progressive Jackpot Bonus.

The Free Spins Bonus will instantly trigger when 3 or more Scatter Symbols land in any position across the reels on the same spin, but the Progressive Jackpot Bonus will only ever randomly trigger. During the jackpot bonus, which takes place away from the reels, simply click on the items to reveal jackpot symbols, and when you find enough of the same jackpot symbols, you will instantly be awarded the corresponding jackpot.

If you enjoy playing on the new Age of the Gods: Norse – Ways of Thunder online slot, then you may also want to check out some of these great games too if you haven’t already. Some of the most popular Age of the Gods slots are titles such as King of Olympus, Rulers of the Sea, Mighty Midas, Medusa & Monsters, Goddess of Wisdom, God of Storms, and Fate Sisters.